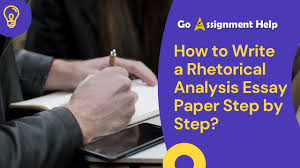 Rhetoric Paper. For this assignment, you will write a 1000-word rhetorical criticism of a speech.  This means that you will make an argument about the speech, applying your knowledge of BOTH classical (old) AND contemporary (new) rhetorical concepts. Additionally, A basic thesis (potential grade of 3) could be as simple as one of the following:  “This is a great speech because [something related to a rhetorical theory]…,” or, “This speech is flawed because [something related to a rhetorical theory]….” A more advanced thesis would make a more critical, contestable claim that you construct. Also perhaps an argument about a specific function of the speech or a particularly well-designed rhetorical method in the speech.

You might, for instance, write a thesis that says something like, McCarthy’s use of the metaphor ‘communism is disease’. Which allowed him to advocate his proposals as the only appropriate course of action for the U.S. Whatever it is, make sure you offer a clear thesis that you will spend the rest of the paper defending.

Make sure that you use both one classical and one contemporary theory somewhere in the paper (they don’t both have to be in the thesis).  If you were using the McCarthy example above, for instance, you would also eventually need to draw in some classical theory. you might argue that McCarthy’s metaphor leads to the kind of manipulation that Plato saw as the major problem with rhetoric.